From his Glasgow Chamber of Commerce profile, Richard Brown was made Executive Director of Development and Regeneration Services (DRS) at Glasgow City council in March 2012.  From his profile from the Glasgow Chamber of Commerce you can see he started in Strathclyde Regional Council 1988 then joined Glasgow City Council in 1996. From there he was made Managing Director of Glasgow Community Planning Ltd then in March 2009 he moved to City Property (Glasgow) LLP.

This remember was the ALEO (Arms -Length Enterprise Organisation) created by Steven Purcell to reward his Labour mates with salaries and big retirement payoffs. All of Glasgow City Council land and housing was rolled into this entity. Using the land and housing as security large loans were taken out to fund.

Recently City Property (Glasgow) LLP was the centre of the Police Scotland investigation into cronyism and the awarding of housing maintenance contracts between members of Sadie Docherty, GCC Lord Provost’s family with John Docherty (Sadie’s son) on the City Property side of the deal and Willie Docherty, Sadie’s husband on the Mears Scotland on the housing repair side. Keep it in the family as they say.

In March 2009 , Richard Brown must have attracted attention while in City Property (Glasgow) LLP enough to be brought into DRS which had a lot of say in which land was surplus and who it would go to.

In May 2006 as a council surveyor he  also attracted attention for a land under-valuation in the investigation of a Glasgow City Council property deal done between 2001 and 2004. Here’s the Herald 26 May 2006 report: 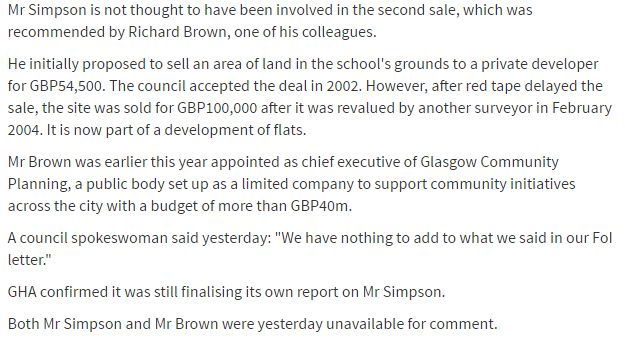 Looks like GCC decided send Mr Brown into exile or pasture to hide him out of the way for a period till the story cooled down and sent him to work as Company Secretary of Glasgow Community Planning Ltd in April 2006 just before next month’s report in the Herald. From Companies House: 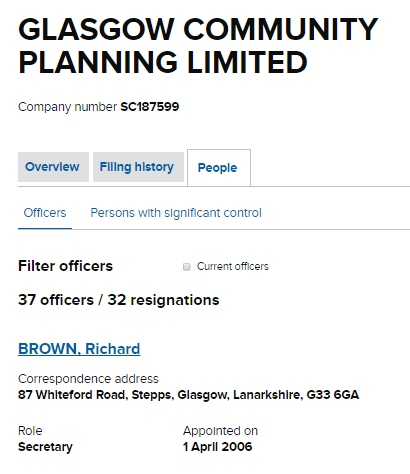 After the EU State Aid case complaint was raised in 2013 it appears that it was Richard Brown’s main task as Executive Director of DRS to provide disinformation on the Celtic land deals with Glasgow especially the Westthorn valuation of £675,000.

Firstly Mr Brown was asked to justify the Westthorn valuation methodology and the abnormals, these are the deductions whereby it is very easy to destroy a valid valuation to some irrelevant price.

From a FOI request in September 2013: 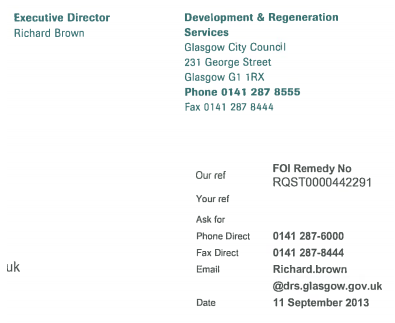 Mr Brown states firstly that Westthorn developable area of 13.2 acres was more than halved by a “blast zone” of 7 acres to 6.2 acres when the Health & Safety Executive Consultation from June 2005 only reduced it by 0.7 hectares (1.7 acres).

Mr Brown alludes that “The Council’s Geotechnical Team investigated the site to determine the extent of the abnormal conditions”.

As we will show below that GCC Geotechnical team did not do their own independent site investigation but instead they used the buyer, Celtic’s, URS Desk Study from October 2004.

Mr Brown also stated, in this FOI reply, from 17 December 2013 that Glasgow City Council had done their own Geotechnical report and Celtic commissioned their own:

From that point onwards several attempts were made to obtain that independent GCC report with the Celtic geotechnical report assumed to be commercially and confidential and beyond reach of any FoI. However because the EU State Aid case complaint had been lodged, Mr Brown used a FoI exclusion clause that it would harm UK/EU relations to release ‘their’ geotechnical report while the case was being heard in Brussels.

So it wasn’t until August 2014 that a complainant who had tried to get the GCC’s geotechnical report under FoI, went to a FoI review, had to resort to complaining to the Scottish Information Commissioner in an attempt to get said GCC report on Westthorn. Unfortunately he did not succeed in getting the report for the same UK/EU relations excuse.

BUT he did discover that Richard Brown was lying and kept that lie going from December 2013 till August 2014. It took 9 months to expose Brown’s deception. There was no Glasgow City Council geotechnical report and that the council only relied on Celtic’s URS Desk Study with the unsubstantiated abnormals to give Celtic a low price of £675,000. The middle paragraph below explains that the council only used Celtic’s report and did not create their own: 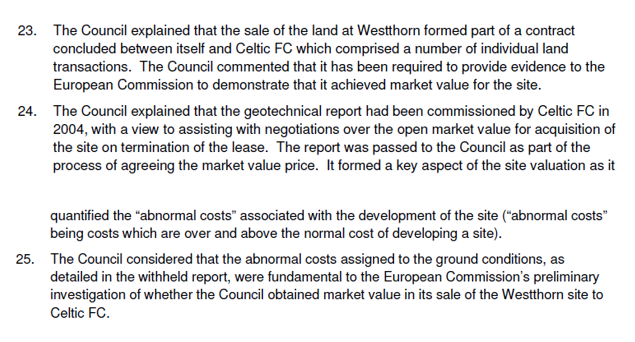 Under the FOI Scotland Act legislation you can be fined for deceptive behaviour and lying. Mr Brown obviously would not clarify that they did not do their own geotechnical but to deliberately say you have one when you did not was obviously done to harm the complainants EU State Aid case. Not sure if this should be referred to Police Scotland or Glasgow City Council for the deceptive and corrupt behaviour of a council employee.

In February 2015 to prop up the lie of the 7 acres ‘blast zone’ to reduce the developable area on Westthorn from 13.2 acres to 6.2 acres his figures did not appear to add up so Mr Brown pulled out an extra 15% ‘blast zone’ to make the figure add up. As said before, the HSE consultation zone does not need extra bonus un-developable zones. This is corrupt.

Richard Brown now should answer to Glasgow City Council, Police Scotland and the Scottish Government because his lies renders the EU State Aid case that went to the EU Competition Directorate in July 2015 as null and void. There needs to be a public inquiry for lying at the top of the Glasgow City Council and the EU case re-opened.

« Savills Report needs to be condemned as unsafe. SEPA & Scottish Water say no contamination on Westthorn.
Amazingly the only Glasgow City Council Geotechnical department study on Westthorn ever done is a couple of pages from 1998 »